In the final week of what will hopefully be Shawn’s final chemotherapy treatment, a strange thing happened. I began to make connections like crazy. I’d written previously about the isolation I’ve felt at CHOP and my struggles to make connections in the early days of our oncology floor admissions following the isolation I felt during the undiagnosed months at CHOP with no disease affiliation when I felt no hope of making connections and began writing this blog in an effort to find some.

I can’t say that I did a single thing differently during our final scheduled chemo admission than I didn’t do for any of our previous oncology admissions. I was probably less angry. That might be a key difference. But that’s been a gradual process. I was probably only slightly less angry than I was a month ago and only slightly less angry than the month before that. I’m not sure that my anger level accounts for the uptake in connections that I’ve made recently.

Nearing the end of this segment is not the end. Not by a long shot. Don’t ever think that a family nearing the end of a child’s active cancer treatment is anywhere even close to the end. That will only add to their sense of anxiety and isolation.

I’ve made connections with at least a half a dozen families during this stay, at various stages of this process. Some have been at this for years. Some came here last Tuesday crying, “I knew something was really wrong, I just knew it!” in the room next to us on their very first admission. Some were on round two, seven years after round one.

That’s at least five times more connections than I’ve made during the previous admissions.

Shawn was also more open. He went to every play group, music and art therapy groups, and casual gatherings he could find. Even when those efforts were physically painful for him, he wanted to be there. It was such a contrast from months ago when he refused to do anything or a year ago when I got annoyed by the offers for him to come to a group. At that time, he was screaming in pain and they couldn’t even explain it let alone fix it, what good was a music therapy group going to do him?

The anger was still there. I again yelled and cried in the hallway. I cried on the bathroom floor. I cried myself to sleep more often than I didn’t.

Lilly has made some friends here this time, too. Other siblings. This stuff is indescribably hard for the siblings. We got to know a family that we met during our last admission. They were discharged on Saturday. We tried to get Lilly down here to say goodbye before they left. The girls had become

fast friends, first meeting in a “sibology” group, and later having wheelchair races in the hallway. That kid came to our doorway several times on their last day to ask if Lilly was here yet. Finally I found out what time Lilly would be here. I went to their room to tell them. It was being cleaned. The bed was already crisply made for the next kid. All the kid artwork was off the walls. They were gone.

There’s a transient nature to this life. How dangerous is it to makes friends here?

For the first time in over a year, I have no guaranteed expectation of returning here. There’s a level of anxiety that comes along with that reality. Life here became our New Normal. Now we need to find another one.

And then it was our turn to be gone. 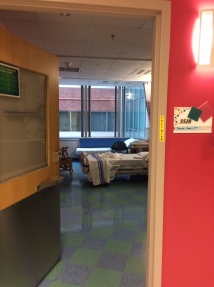 As our final admission came to an end, discharge number twenty, I kept thinking of the end of the last episode of Seinfeld when the four main characters get off the train and Elaine is left standing, waving, and says “Well, see ya.”

One year ago, Shawn missed the first day of school (I think.) Three months ago Shawn missed the last day of school. In between Shawn missed over a hundred days of school and countless partial days. Then we spent the summer doing “Camp CHOP” with inpatient chemo starting every four weeks for 15 days at a time. The idea of what we’re doing now was not even on our radar a year ago today. I looked at emails and texts that Bill and I sent to each other on those days and they included words like “I don’t know if he is sick again or is just saying that to get out of brushing his teeth” and “Don’t brush your teeth again, whatever, I don’t care, just eat your fuckin’ breakfast or you will be starving in an hour” and “It will be very difficult for me to get out of work today. We’re slammed already. Hopefully he’s ok until [his dad] gets off work. Hopefully he’s ok period.” We had no idea what was actually going on. Reading those emails was hard.

I eagerly read Facebook today and liked every single First Day of School picture I saw. I honestly liked them. I loved them. All of them. I posted my own. Those pictures are the best. Parents love those pictures. Our kids tolerate them. They are the good views. The hope views. The We’re Moving Forward Each Year views.

I work in Higher Education. I never have off for the kids First Day Of School. I usually go in to work early that day. When I was my kids’ ages and younger, my mother made homemade cookies every First Day Of School. I have never been able to do that until this year. Since I’m still on leave, I could be home baking cookies while they were at school. I baked early so that I’d be able to go get Shawn when the school called me to come get him. No one expected him to make it past lunch. He usually needs a nap after a trip to the grocery store. 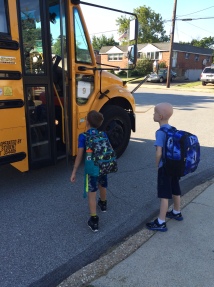 Shortly after noon, I sent an email to his teacher, principal, guidance counselor, and CHOP hospital teacher. I wanted to get things set up for next week when we go back for two weeks his last round of chemo. But I also wanted to see how things were going. His guidance counselor was the first to write back. She said that she checked on him at lunch and he was happily eating his little pizzas and wanted to go out for recess with his class. His teacher wrote later. He lasted the entire day.

Shawn is not supposed to be doing this well at this point in treatment. He’s in the final rounds of one of the most intense chemotherapy regimens there is. He continues to surprise us daily. We are lucky.

Last night we talked about going back to school. He was very excited. He told me, “this year I’m not going to be as shy because everyone in the school knows who I am because, you know, the cancer and stuff.”

We had tacos for dinner. 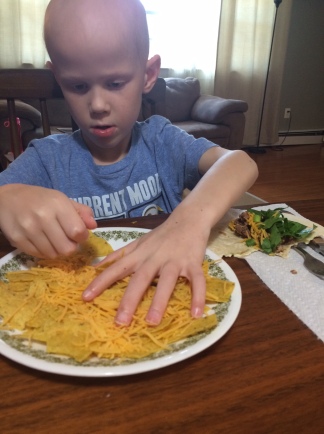 Shawn’s been asking for tacos for weeks so I prepped them after baking the cookies. Maybe he’d actually eat them. He’s losing weight and needs to eat. At dinner, I asked him about his day at school. He saw Happy, the Monkey that sits in his chair when he’s not in school. His teacher read the book to the class. He said goodnight to Happy before leaving. He told me that at recess he saw “the grave that doesn’t have a body” of the kid who died at his school four years ago and some other kids were asking him questions. I tried to find out more about this. I think it’s a bench that is a memorial for Nick, the boy from his school who had cancer and died in 2012, but Shawn didn’t have much to say about it. Nick’s mother visited us at CHOP a couple weeks ago. Shawn has been thinking.

At the bus stop this morning, a neighborhood mom told me about a family friend who’s five year old son was diagnosed with brain cancer a month ago. From her description, I suspect it’s the same type of cancer and same treatment protocol that Shawn has. I spent all day thinking about this, while baking cookies and prepping tacos. How do I help them when I don’t even know them? Would this discussion have happened a year ago?

What did you do in school today?