Eight weeks ago, when we received Shawn’s diagnosis, we navigated from his room on 3 East at CHOP to Radiation Oncology in the Perelman Center at the Hospital of the University of Pennsylvania so they could map his brain and spine in preparation for the Proton Therapy Radiation. CHOP doesn’t have its own radiation department, they share with HUP. The journey from one building to the other while inpatient is a series of modern hallways above ground followed by elevator rides below ground, through concrete hallways that look more like tunnels under the streets, back up the elevator into the main HUP building, down some more hallways, across the bridge to Perelman, then back underground to the Radiation Oncology department, through the huge room where the mostly older adults are waiting for their own treatment – often with their middle age children along to help, into the little CHOP room where the kids are waiting – often with their middle age parents along to help.

We were both still quite angry at that point, most of all Shawn. The massive inconsistencies of CHOP, the terror of the undiagnosis, and the frustration of the seven month diagnostic process left both me and Shawn distrustful of the entire process.

There are three Types of parents in the little CHOP section of the Radiation Oncology waiting room:

Seven weeks ago I was Type 3.

Seven weeks ago Shawn was still grunting and kicking his way through any procedure at the hospital and at anyone with a CHOP badge.

Six weeks ago we started Proton Therapy Radiation. The first of a series of treatments that will hopefully kill the cancer cells that have invaded Shawn’s brain and spine.

Five weeks ago Shawn listened to a person in the big waiting room ringing the Ship’s Bell, a ritual in the cancer world after completing a stage of treatment. Everyone in the room clapped and cheered. He asked what they were doing. I didn’t know so I found out and explained it to him. He said he hated the sound of that bell and didn’t want to do it when he finished radiation. I said he didn’t have to. I personally thought it was stupid. What’s the point of that? Back to my silent headphones after Shawn had his daily anesthesia and got wheeled back to poison his head and spine.

Four weeks ago Shawn made a friend. A five year old girl finishing her second round of treatment for rhabdomyosarcoma. I chatted with her mom while Shawn talked to the kid. I don’t remember either of their names but the mom said that they were doing chemo next, through December. We’ll see each other there, we said. Later we heard that girl ring the bell from Shawn’s recovery room. Considering the odds/prognosis of round two of treatment for rhabdomyosarcoma, I am edgily anticipating seeing them back on the 3rd floor at CHOP. And after that conversation I realized that I’d slipped into being a Type 2 parent in Radiation Oncology.

Three weeks ago I met a Type 1 family from Virginia. They are in Philadelphia so their kid could get radiation treatment with the Proton Therapy machine at HUP. They have four kids, the youngest in treatment, the next older two along for the ride, the oldest was at home  with relatives because he needed to be in school. They knew Shawn. They talked about things Shawn had done on previous days. The radiation Child Life Specialist, Melanie, had given Shawn a Chemoduck early in week 1. That week a nurse called it “ChemoChicken.” I corrected her, “it’s a chemoDUCK,” I told her. She laughed and told me that Dr. Joe had mistakenly called it a chicken so it became a thing to call it ChemoChicken. Oh. A joke that I didn’t get because I was at work, keeping my insurance and at least some pay, pretending to be doing useful things there while it was killing me not to be in radiation with Shawn, learning the inside jokes, getting to know the nurses, doctors, and other families, being his mother. I looked forward to my CHOP days and dragged myself out of bed on my non-CHOP days.

One week ago I asked Melanie if she understood exactly how big of a deal it is to have Shawn name one of his stuffed animals after her. This is the kid who previously hit and kicked and yelled at anyone who dared to ask about his animals, let alone touch them. To name one after a person with a CHOP badge?

This week we finished radiation. The transformation that Shawn experienced was nothing short of astounding. The kid who eight weeks ago hated everyone and everything cried this morning because he was sad and excited that this phase of his treatment was over. Next up, four months of intensive chemotherapy. We all lingered there a little longer than usual before finally walking out the door. I looked back. Melanie was still waving.

He feels better, physically, now than he did six weeks ago when he was throwing up in his bed and in the car on the way to treatment. He went through six weeks of the most intense radiation therapies a kid can go through. No one expected him to feel as good as he did the entire time. Yesterday Lilly attended a sibling group while I met with the other parents. A mother who’s daughter finished her own radiation in our second week said that she remembered Shawn because he and her daughter both appeared so healthy among all the really sick looking kids in the waiting room. The fact is, it’s an illusion. We don’t know how healthy Shawn is or isn’t, and that family is probably heading across the country for a last and best effort clinical trial to try to save her life.

The real transformation, the true renewal, was in Shawn’s approach. His outlook. His attitude. His outreach. His friendliness. His hope. Shawn was the first one to become less angry. I followed.

This morning the kid who previously said that he hated the sound of the ship’s bell proudly led everyone out to the big waiting room this morning and rang it. Twice. 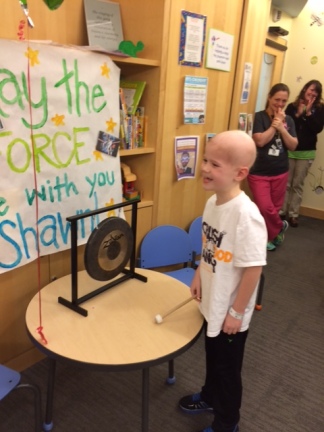 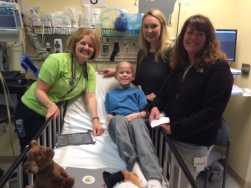 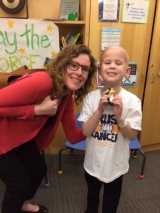 Disco in the Proton Therapy Room 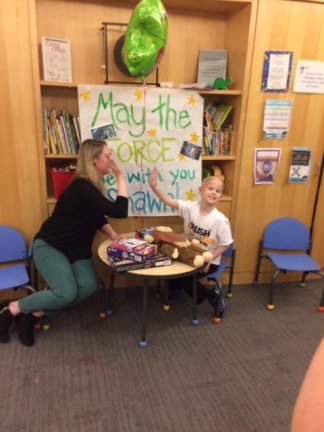 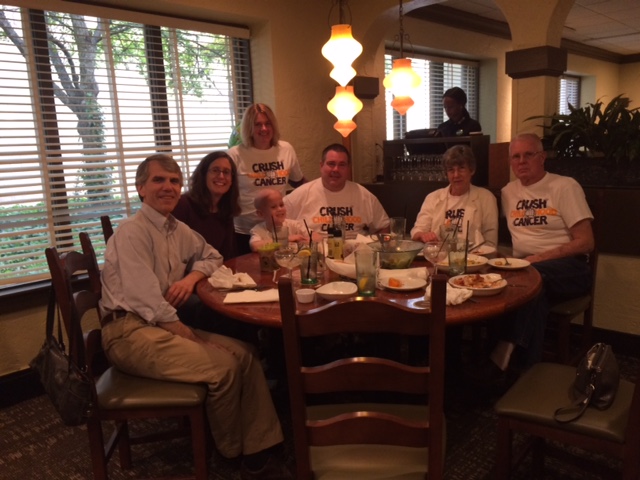 Postscript – Shawn allowed me to post all these pictures, and I hope the CHOP people are also ok with it. This is the first time I’ve posted pictures on this blog that included any of our faces. That’s not an accident.

3 thoughts on “The Radiation Transformation”