Two years ago Lilly and her friend, Gabrielle, began asking if they could have a bake sale in front of our house. Gabrielle’s mother and I kept saying “yes, someday” each time the question came up. I think we envisioned a lot of work for us, the moms, and there always seemed to be schedule conflicts for one or both families.

Last spring they asked again to hold a bake sale but this time said they wanted to donate the money they earned to CHOP. We picked a date. April 17th.

The kids did almost all the work themselves. They spent the Saturday before the event making 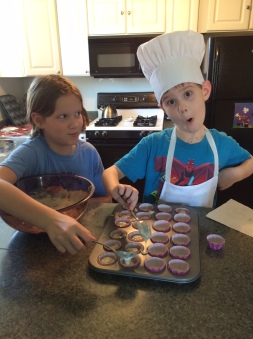 cookies, cupcakes, muffins, and Rice Krispies treats. I helped them take the finished products out of the oven, and Gabrielle’s mother did the same, but they did the rest. They set prices for each item. They made ingredient cards to be mindful of those with allergies. They made signs and decorated a cash box. The theme would be “Desert Island.” (Get it?) They chose Caribbean music to play. They cleaned our outdoor furniture for its first use of the year after accumulating winter grunge on the back patio and moved it to the front yard.

We spread the word through friends and family. A mom from Shawn’s school asked if she could post about it on the parent Facebook page. I said yes.

After a cold and rainy early spring, April 17th was suddenly sunny and warm. It was this year’s rendition of that first spring day when nature pops and you want to be outside all day. For most of the early afternoon we had a steady stream of customers. Friends, family, classmates, and neighbors came not only to buy goodies but also to offer personal support to our family and to the effort to raise money for CHOP. More than one parent bought a couple of $0.75 cupcakes with a $10 or $20 bill and told the kids to keep the change. Kids brought their allowance money and piggy bank change to donate. My own children did the same.

At the end of the day, they had raised $265 in about three hours. We saw old friends and met new people and neighbors and felt a lot of love and support from our community. After seven isolating months in and out of the hospital, without the association and identity that comes with a diagnosis followed by the struggle to accept our new identity, we felt like we were a part of something that day. The kids felt proud of their effort and its outcome. They had done something good and they knew it.

Like the previous two years of trying to arrange our family schedules for a bake sale, we then spent the next three months working to schedule a time for the kids to donate the money to CHOP. It would have been easy enough for me to deposit the cash into my checking account and then make the donation online. But we wanted the kids to have the chance to donate it in person, to experience this not as an abstract exchange of money on the internet but to hand it to a person and to do so in the hospital.

Finally, this week, we were able to meet with someone from the CHOP Foundation. Shawn’s low blood counts meant that he wasn’t able to leave the floor so we met on the bridge between the inpatient oncology wings. She brought gifts for the kids and asked them if they have a preference for where the money goes. She listed several options — child life, a particular department, medical research, the general fund, etc. As I’ve written previously, I have my own opinions. But this is not my money and this was not my fundraiser. They chose the general fund. Use the money where it is most needed.

During this exchange, I contemplated the $3.6 million that my insurance company has paid CHOP, so far, in the last year. I compared that with the $265 that my children, with the help of their friends, were right now giving to this hospital. I thought about how lucky we are to have as good health insurance as we do. I thought about how proud I am that my kids and their friends recognize that not everyone has what we have and that they want to help.

Last night Shawn had a procedure that was very traumatic to him, both mentally and physically. We once again invaded his body and beat him up a little bit more in this massive effort to try to fix what is wrong. Lilly was here with us. She held his hand and said encouraging things to him. Later she told me that she thought that all of this is unfair. When I started to talk about the necessities of his treatment, she stopped me and said “no, I don’t mean just what’s happening to Shawn, I mean that all these kids need to be here in this hospital at all.”

One thought on “The CHOP Bake Sale Donation”